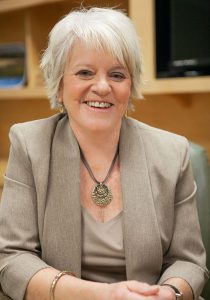 On February 20, iSi held an event to salute the career of Karma Mason, iSi’s long time President, COO, and co-owner, who is retiring from full-time duties.

Karma started iSi with her husband Gary Mason, iSi’s CEO, in 1990.  They built iSi from their dining room table to a thriving company of over 150 in 4 office locations.  She started out wanting to be a PE teacher, but was convinced to get a geology degree by her father, who owned an oil and gas company.  She worked with her dad for a number of years and when his business closed during the downturn in the oil industry, she went to work for the research and development department of Vulcan Chemicals (now OxyChem).  Gary also worked at Vulcan Chemicals.  When they decided to start their own business, Gary left Vulcan and Karma stayed on, but working nights and weekends to help keep the business running until she joined full time in 1991.  She worked environmental and geological-related projects for many years.  As iSi continued to grow, she eventually phased into more of the role of Chief Operations Officer.  This highlighted her strengths of managing operations and driving for success.

Recently retired Wichita State University bowling coach Gordon Vadakin provided a narration to highlight Karma’s leadership, passion, and drive to succeed.  As a freshman, Karma and her team had won the first ever National Collegiate Bowling Championship, and it was the first national championship for Wichita State in any sport.  They won the national championship again in her junior year, after taking second in her sophomore year. 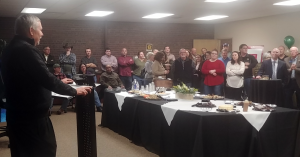 Vadakin become the coach in Karma’s senior year. “Believe me when I say this – I let her completely run the women’s team for the year. Hell, if I got in her way, I would have been run over. In fact, in all my years of coaching since then, I’ve never seen anything close to what Karma did for that 1978 team. I have no idea what Karma’s management style is like today, but back then I would describe her as unbelievably driven,” said Vadakin.  Karma’s team won the national championship again her senior year, making her the only person to be on three national championship bowling teams in the 45-year history of collegiate bowling.

“Karma showed me that no mountain is too high, no goal to big, and that dreams become reality when you pour yourself into what you believe in,” said Vadakin. 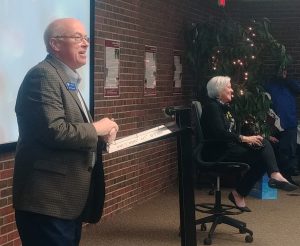 Wichita Regional Chamber CEO Gary Plummer talks about the impact Karma’s had on the Chamber.

Gary Plummer from the Wichita Regional Chamber of Commerce and Alan Cobb from the Kansas Chamber of Commerce and Industry were in attendance and each spoke glowingly about Karma’s leadership, assistance, education, and guidance she had given both organizations.  Karma is currently on the board of both organizations and has been involved with each for a number of years.

Tracy Streeter, former director of the Kansas Water Office, expressed similar remarks about Karma from her time on the Kansas Water Authority.  She was one of the longest serving women in the board’s history.  Streeter praised Karma’s leadership in putting together the state budget for the group.  When she presented the budget to legislators, she not only knew the budgetary dollars and cents, but she could speak to all of the technical issues involved as well. 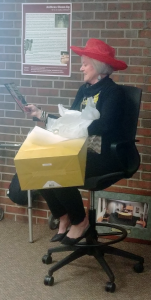 Several employees remarked about their time with Karma both in serious and lighthearted ways.  As they’ve done with other retiring or leaving managers, long time iSi employees Tammy Gonzales and Tami Hadley prepared a video tribute.  iSi Facility Support Services manager Al Tolbert gave her a U.S. Air Force CMSGT Challenge Coin given only to a few for special achievement and that honor was very special to her as well as a framed photo of her office with “The Birthplace of Leadership” inscribed on it, from iSi’s Dick Genter.

Gary Mason said that Karma had been telling many people she didn’t want a rocking chair as a retirement gift, so he said “…we got her something so she could be more active,” – a walker with a bowling ball tied to it.  She also received a symbolic key to the building (because she’s always welcome), and gifts to help her decide what to do in retirement such as a red hat, silver sneakers, free crochet lessons, and a book about progressive penny slots.  Karma is known for her rock collection, so iSi did give her a serious gift: a heart-shaped geode from Utah.

Although she’s no longer going to be at iSi full-time, Karma will remain a part of the company and will continue to provide geological technical assistance when needed.

If You’d Like to Send a Message to Karma

If you’d like to send well wishes to Karma, email us here or you can send a card or note to her in care of iSi Environmental, 215 S. Laura, Wichita, Kansas 67211.