Sustainability Consulting for the 21st Century

The modern world is a sustainable one. It’s time for your business to join the ranks of those who are making a difference.

Sustainability has become one of the most important topics of our time. As the world becomes more and more aware of the environmental, social, and economic challenges we face, more and more businesses are looking for ways to operate in a more sustainable way.

Sustainability consultants come from a variety of backgrounds, but all share a common goal: to help businesses move towards a more sustainable future with sustainability services.

Here are four tips to help you find the right sustainability consultant for your business:

Once you know what you want to achieve, you can start looking for consulting firms that specialize in those areas.

Do your sustainability ambitions match resources available for the project? Does the ESG (Environmental Social and Governance) strategy align with your corporate growth strategy?

It is recommended to present a sustainability strategy internally, that outlines tiers of investment and the types of sustainability performance to be expected per expenditure.

Do a deep dive in the sustainability consulting services universe. Once you’ve identified some consulting firms that might be a good fit, take some time to learn about their backgrounds and experience and nail it down to your favorite consulting firm.

How long have they been working in a sustainable business? What are some of the clients they’ve worked with? What do other people say about them? Top consulting firms offer diverse corporate responsibility solutions and professional services across a wide swathe of industry sectors.

Talk to other businesses in your industry and see if they’ve worked with any sustainability consulting firms that they would recommend. If you know someone who works in sustainable business, ask them for their thoughts on different consultants.

The best way to find a good consultant in the large world of the consulting industry is through word-of-mouth from people who have worked with them before.

A global management consultancy will have the general pulse on corporate social responsibility. Top sustainability consulting firms will be a global leader in change management and integrated business planning.

The best ones possess deep expertise in the management of business risk and climate risk, while working with you to embed sustainability into your culture.

These days, there’s no excuse for not being sustainable, not manage risk, and not create sustainable business models.

Future leaders and businesses that don’t take steps to operate sustainably will not only be missing out on opportunities and losing business value, but will also be left behind as society progresses towards a more sustainable future.

These can be complex problems. Sustainability consulting is one of the best ways for businesses to make sure they’re operating sustainably and making a positive impact measurement on the world around them.

iSi Environmental is a leading provider of environmental consulting and management consulting services in the United States and we are committed to protecting the planet and its inhabitants with the skills and knowledge of our people. With us you get long term value.

Senior Executives and Sustainability Teams turn to us when:

What can iSi’s team of EHS Consultants do for you?  Contact us! 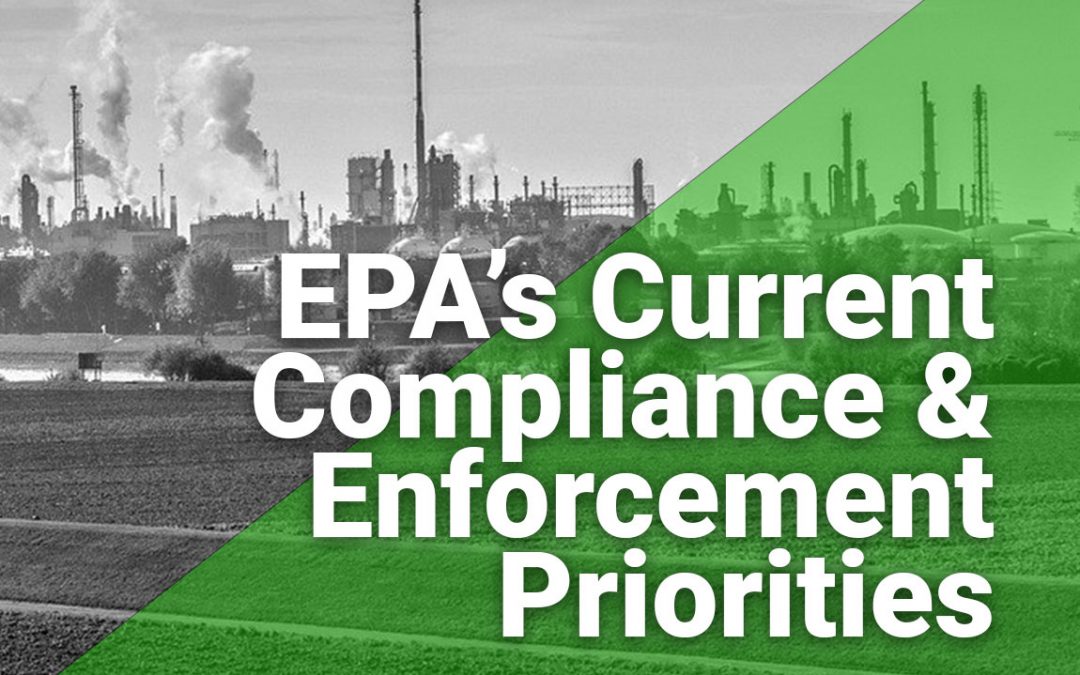 EPA was scheduled to go back out to do more onsite inspections, but the resurgence of COVID put a delay on that.  For the past year they had been doing some announced remote inspections to evaluate compliance.  However, unannounced inspections will eventually resume.  Inspectors will have Smart Tables preloaded before they go onsite.  Their goal is for the report of findings be available in less than 60 days after inspection.

One important comment made was that EPA is working on implementing the public posting of inspection reports.  That is, what is found at your site during an inspection and what’s on your report will eventually be available for anyone to see.

EPA has been given several directives through Executive Orders (EOs), and the issues EPA will focus on will very much be related to these.

These EOs include the following guidelines:

The term “environmental justice”, or EJ, goes along with these directives and will be applied to daily decision making.  To meet the directives, EPA will be spending more of their time looking at regulated industries in these underserved communities and will be strengthening enforcement of violations for cornerstone environmental statutes and civil laws.  Thus, the number of air, wastewater, and hazardous waste inspections in these areas will increase and items such as air monitoring results may be posted for the public to review.

EPA plans on going into these areas and speaking with the people about their enforcement case concerns rather than just determining themselves what EPA thinks they need, as they historically have done.

In the area of climate change, they’ll be targeting cases with greenhouse gas-related requirements and a ban on importing hydrofluorocarbons.  Climate-focused mitigation and resilience will be a part of the efforts.  For example, taking a look at situations like floods where there are chemical plants in floodplains or where sewer systems could have major overflows.

National Compliance Initiatives are set goals that follow a certain process and include the states. Because of this, they  are much harder to change from administration to administration.  Some of these have been initiatives for the past 2 years, but give an idea of certain targets of inspections.

This is hazardous waste emissions via air, where there are regulations related to the quantity of VOCs emitted.  This is for facilities with tanks, surface impoundments and valves.  Inspectors have started making a concerted effort to look at these during their inspections and it’s one of the lesser items focused on by some facilities. Right now 30% of facilities being inspected are not complying with this part of the regulation, and the fines can be $255,000.  What is RCRA Air? Learn more here.

EPA will be checking that Risk Management Plans are in place and implemented properly for those that are required to have them.  This is related to Clean Air Act section 112(r) for the prevention of accidental releases of chemicals.  Facilities that store and handle large quantities of listed regulated substance in a process, over certain threshold amounts.  EPA inspection data is showing that 50-75% of facilities are not complying fully with RMP.

We listed these 2 initiatives together because they will be treated similarly under the umbrella of EJ.  Making air and water cleaner has always been a goal, but considering the EOs, a focus on issues with public water systems, lead-based paint and air emissions from inner-city factories helps EPA accomplish more than one goal.  Plus those kinds of issues will affect a large amount of people at once. It becomes a more bang for their buck item, so to speak.

EPA is looking to conduct enforcement on companies who make, develop and sell aftermarket devices that bypass, defeat or renders inoperative any emission control device in order to enhance engine performance.  Examples would be plates that partially block a portion of exhaust gas stream, kits that enable the removal of the catalytic converter or the diesel particulate filter or tuners that stop signals from going to the   vehicle’s computer that usually would turn on the check engine light or put the vehicle in limp mode.  EPA’s news updates have been announcing fines for a number of companies recently for violations so this initiative is up and running.

EPA is looking to reduce the significant non-compliance they’re seeing with National Pollutant Discharge Elimination System (NPDES) permits. In an EPA memo to regional administrators regarding this initiative, they identified they wanted to reduce the non­compliance baseline rate by 50% by the end of FY 2022, while assuring that the worst violators are timely and appropriately addressed.

EPA wants its regions and states to work together.  Each state’s rate will be looked at as will its approaches (past and future) to reduce the non-compliance rate, the completeness and accuracy of its compliance data (and why it’s wrong/missing), and how and when they plan on addressing the more severe non-compliance violations.

Over 60% of the non-compliance is attributed to “non-receipt” of Discharge Monitoring Reports (DMRs).  Interestingly, EPA speculates that some of this isn’t all about companies not turning in their reports, but the way the states communicate or handle getting the information into the EPA’s tracking system.  However, make sure you get your DMRs in as this is something that’s on the radar.

If any of these initiatives can be tied back to those EOs, then all the better for EPA and their compliance goals.  For example, in the press release announcing a settlement for one of the companies found selling mobile defeat devices, part of the settlement was for the company to “…replace 3 school busses in a Columbus, OH in the areas of environmental justice concern.” In that same release, the regional administrator said she was “…pleased that the settlement will reduce the impact of pollution in already overburdened neighborhoods.”

EPA has a screening and mapping tool to help them identify areas that may be candidates for environmental justice-related consideration, outreach or programs. EJScreen is considered to be “…a consistent tool that can be used by EPA, its governmental partners and the public to understand environmental and demographical characteristics of locations throughout the United States.”

EJScreen was actually developed in 2010 as a response to an Executive Order by the Clinton Administration.  It is geared to help users identify areas with minority/low income populations, potential environmental quality issues and places where environmental and demographical indicators are greater than usual.  EPA plans to use EJScreen to implement permitting, enforcement, compliance, outreach and enhance geographically-based initiatives.  Facilities who lie within an EJScreen target area will be the ones who will receive the most inspections.

Other compliance hot topic/focus areas mentioned on EPA’s radar include:

Do you see any issues here that may be affecting your company?  Or are you unsure which ones may affect you?  Contact iSi today for EPA and state environmental compliance assistance and advice!

We send out our blog articles via email.   Don’t miss an article!

We send our articles by email whenever we add a new one.  Don’t miss out!  Sign up for our blog today.
Subscribe


A member of our Consulting Services division, Bria works with client facilities for annual environmental reporting and day-to-day environmental compliance assistance.  She also manages iSi project managers.  Bria has conducted well over 100 Phase I environmental site assessments for iSi and is one of the trainers for our Hazardous Waste Management class.